Do you have an event that OCR can help promote? - Let us know!


Mr. Trump, if your going to lie about Renewable energy, at least make it realistic 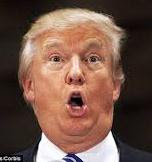 On August 2, 2016 this happened, as reported by many outlets and reference here from The Hill.com,

"“It’s so expensive,” Trump said of alternative energy at a rally in Pennsylvania.
“And honestly, it’s not working so good. I know a lot about solar. I love solar. But the payback is what, 18 years? Oh great, let me do it. Eighteen years,” he said, turning to wind power. “The wind kills all your birds. All your birds, killed. You know, the environmentalists never talk about that.”"

Ladies and gentlemen, the Republican candidate for President.  The fact at a Republican candidate decides to tell lies about renewable energy is not a surprise.  The real surprise is how LAZY these lies are.  They are cartoon level lazy.  "Kill all the birds"?  As I sit here typing on this keyboard I see 3 birds out my window.  I can hear another 3-4 because the window is open.  I guess wind power hasn't got to them yet.

Billionare Mark Cuban, who once said a Trump presidency was a good idea, recently changed his tone drastically, saying that the opportunity Trump has was squandered because he was "lazy" and "didn't do the work".  I am a rabid support of renewable energy and action on climate change, but there are certainly criticisms.  He was just too lazy to find actual criticisms, so he gave caricatures of criticisms.